We brainstormed every possible scenario and, even if we set this up by appointment only, because we can't sanitize the bunnies between handlers, we simply could not come up with a safe way to hold this event in accordance with the current Covid-19 health guidance. As one of our favorite events of the year, we are crushed to announce its cancellation. Stay safe, everyone, and see you next Easter.

Pet World provides the setting, complete with live bunnies, and you provide the child! (Or children, family, self, etc.) Bring your own camera and we'll help you set up the shot. $5 per session! No appointment necessary. Just walk in anytime between and 3 and 7pm!

The Super Fine Print: Photo sessions should only last about 2-3 minutes for the safety of the rotating rabbits and to keep the line moving. Extended sessions (5-7 minutes) available for $10. 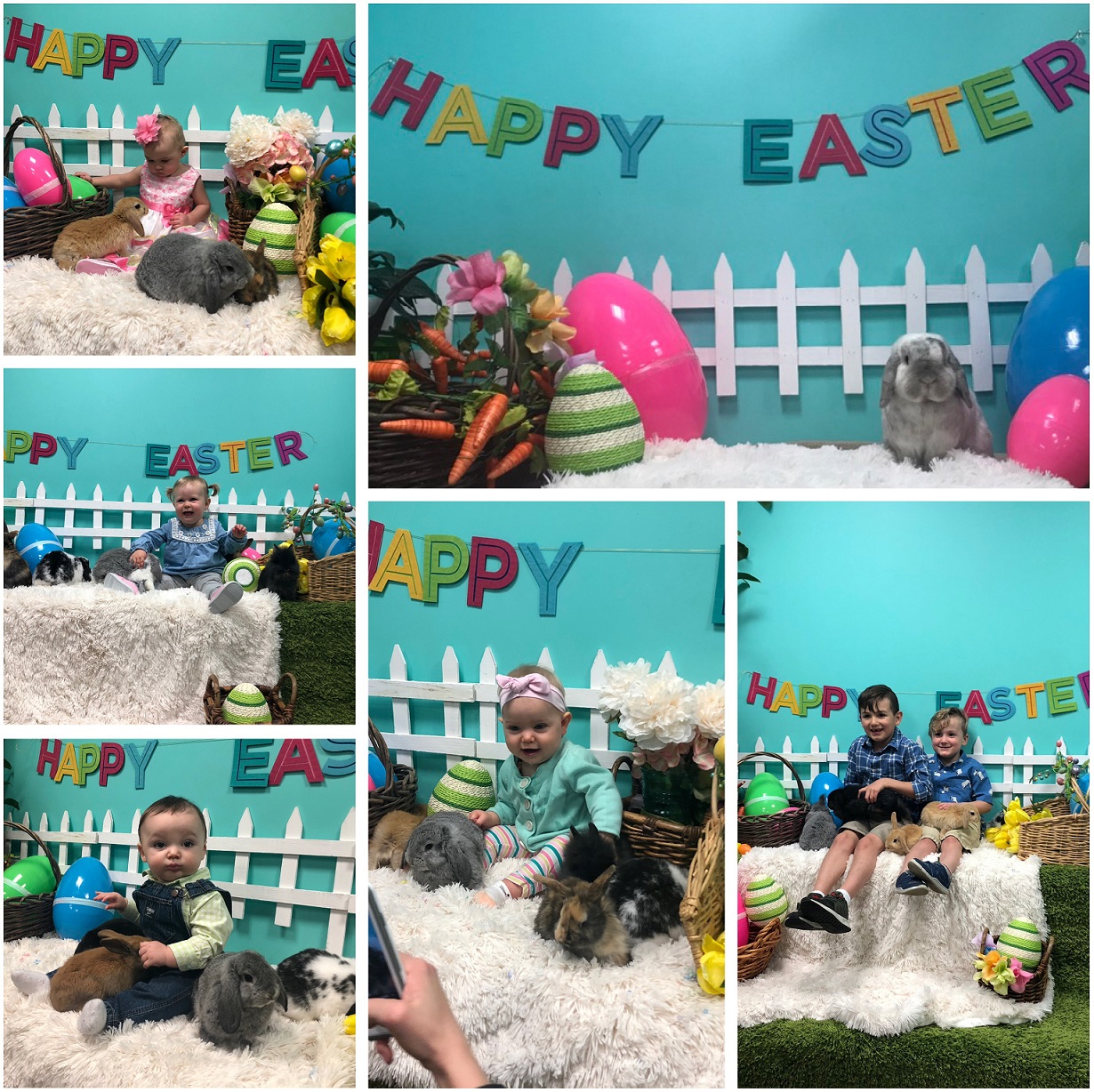 About 20 years ago we decided we had had enough of this nonsense when it first started with dogs and cats. Pet World’s mission is to foster affinity for animals, educate the public, inspire responsible practices, and conserve the environment, not contribute to the unwanted pet population, so we made some changes. Our first decision was to discontinue providing puppies. Even though we operated nothing like puppy mill stores, knew our sources personally, took in entire litters from all kinds of situations and rehomed them expertly and responsibly, it was the 90s and seemed like the right thing to do at the time. “Adopt Don’t Shop” was the idea. Of course, that decision didn’t change much since we realized later that we were not part of the problem in the first place, but we made a decision and stuck to it. After strengthening our partnership with the other local animal shelter, we decided they were doing a great job with dogs and cats so, later, we discontinued offering kittens, as well. Again, though, not much changed and dogs and cats continue to be the number one and two unwanted animals.

Fast forward to the explosion of the internet and, bam, irresponsible animal sales skyrocket with no end in sight and the unwanted rabbit population grows. We shook our heads as the corporate pet supply stores took the easy road, steered clear of dogs and cats, and then self-righteously declared they would no longer sell rabbits, all the while continuing to sell other mass scale, commercially bred animals by the tens of thousands every year in their thousands of stores. But those are mostly just small pets, right? Reptiles, fish, birds, rodents – activists don’t care about them, right?

Wrong. We care. We’ve always cared and we’ve had enough of the ruse.

There is no easy solution, no appease the public, one time, ban this, stop that, fix-everything-to-keep-the-activists-quiet solution. It’s not that simple and those of us who truly care about animal welfare (beyond social media shaming from the convenience of a mobile phone) work endlessly to improve the lives of living things. Anyone can post uninformed comments online or make a decision from a board room that we all know is about keeping investors happy and has nothing to do with animals. But those of us out here in the fight – living it, teaching it, losing sleep over it, improving it every day – we know what needs to be done and we are doing it. So, this time, about 10 years ago, when it came to rabbits, we took a different approach and it is working. Instead of taking the moratorium route and conveniently excluding ourselves from the conversation, we opened our doors even wider. When someone brings an unwanted rabbit to the other shelter, they send them to us, and we receive that rabbit with nothing but love. Are we rebranding as a rabbit rescue now? Sure, if “rabbit rescue” is what we’re calling it this season, but it’s nothing different than who we’ve always been.

Since 1988 our community has embraced our transparent, open pen concept. They understand the Lawrence Humane Society is the place to go for dogs and cats while Pet World serves as the shelter for everything else. Literally EVERYTHING else. People shop with us to support our efforts because they like knowing their money is working for their community. Our customer family also understands why our rescue animals are integrated into the general population and not hidden in some back corner, labeled as unwanted or abandoned – especially rabbits. What they might not know, however, is that when they are standing inside our pet store, they are also standing inside our animal shelter, and we’re happy to report the unwanted rabbit population in Lawrence has reached an all-time low.

How do we know? Well, where do you think people bring those live Easter bunnies every May when they’ve changed their minds? That’s right. They bring them to us. And we gather history on every single animal surrendered at our shelter and you know what? Those unwanted rabbits aren’t coming from Pet World, shelters, or even other pet stores; they’re being impulsively purchased through unregulated online ads, swap meets, parking lots, and yard sales. Most of the people surrendering rabbits had no idea what they were getting into and most of them had never been to Pet World or the Humane Society before acquiring the rabbit. They made an impulsive, uninformed decision elsewhere and that’s how the animal ended up surrendered.

Why don’t animals from Pet World get returned? Well, some do, on occasion. It’s rare, but sometimes issues arise and the placement doesn’t end up permanent. In that case, the animal is returned to us with no judgement or shame, no lecture, and usually no expectation or even request for a refund. They just want the animal to have a good home. Because we take the time to talk things through before an animal goes home, more often than not, the animal doesn’t go home. You see, our intention is not to place every animal in a home; it’s to successfully and permanently place every animal in the right home. Often, the best home is at Pet World, where our trained staff can care for the animal until the right home presents itself.

At first glance one could assume our open pen concept and events like our “Live Easter Bunny Pix” are doing a disservice to rabbits. One might assume we’re promoting impulse purchases of animals. Upon further inspection, though, when we record a steady decline in post-holiday surrendered rabbits, the evidence suggests the opposite is true and the greater good is being served. Year after year we see a decline in surrendered rabbits post Easter season, to the point where virtually none of the relinquished rabbits were originally from Pet World or other shelters. We are trained, licensed, inspected, open to the public, and follow the rules to do what’s best for animals. Unregulated animal sales through other channels continues to be the culprit. At Pet World, people who might be tempted to take home that adorable bunny for Easter realize they can simply come in to interact with the bunnies instead, anytime. Families dress up in their cute holiday clothes, affectionately love on our bunnies, take some cute pictures, and leave happy – without an impulse bunny buy – only to return later, either grateful they resisted the urge or inspired to investigate potential pets for their family.

And what about the bunnies themselves? They are accustomed to lots of attention and, in safe rotations, they get extra affection during the Easter season. But one thing they don’t get is the stress of being impulsively homed then abandoned then rehomed. Not here. Not on our watch. This time we not only stayed in the loop; we expanded the loop and became part of the solution. That’s what true animal welfare advocates do.