Designed for adventurous third graders (ages 7-9) who love animals and aren't afraid to get dirty! Animal Camp is a week long, action-packed day camp. Kids learn about nature and animals, work and play with animals, and take field trips every day! We promise Animal Camp is unlike any camp your child has attended.

Friday is an all day outing at the Pet World nature preserve including hiking, creeking, climbing, snake hunting, and lunch! The Friday field trip gives kids a glimpse of what they can look forward to with Wilderness Camp when they outgrow Animal Camp.

Due to popular demand, Animal Camp was revised in 2014 and expanded into three categories, adding Wilderness Camp for advanced level, returning campers! Since Animal Camp sells out quickly every year, we added this extra camp for returning campers to make room during the other weeks for more new kids!

NOTE for 7 year old children:
If your child is a very young 7 year old, fresh out of first grade, with a birthday not long before June, (or a first time Pet World camper) you might seriously consider the five day Critter Camp. If your child is an older 7 year old, soon to be 8, who has done a PW camp before or is adventurous and can easily do an all day camp with 8 year olds, you might consider the first week of Animal Camp, instead.

Week 1 Animal Camp is specifically designed for first timers (but open to anyone). We suggest this week for younger kids, former campers who have completed a week of half day Critter Camp and are now ready for all day Animal Camp, or those who are completely new to the PW camp experience. All week 1 campers will receive detailed instruction since usually most everyone is new. (Returning campers will probably just stay with the group or maybe have extra free time during detailed instruction.)

Week 1 kids will learn about the animals at Pet World, beginning with small mammals and including birds, reptiles, and all the different PW animals! They’ll become expert handlers and impress their parents with their pet knowledge. Daily field trips will expose kids to nature in the great outdoors. We’ll start with smaller, local field trips then work our way up to an all day trip on Friday. We'll visit places like the ranger station, nature trails, and Sanders Mound at Clinton Lake, Prairie Park nature center, Mary’s Lake, the Baker Wetlands, the Tortoise Farm, and even make a trip to Sunfire Ceramics to paint Animal Camp keepsakes. On Friday we’ll spend the entire day at Pet World’s secret 80 acre nature preserve – home of the famous PW tortoises!

Week 2 Animal Camp is essentially the same experience as Week 1 but with a mix of new and mostly returning campers who want one more summer of Animal Camp or are not quite ready for Wilderness Camp. Detailed instruction will be provided to new campers while returning campers enjoy extra free time. The topic of Focus Animals - a carefully selected favorite animal for in depth study - will be introduced during Week 1 but only available during Week 2. Kids will be free to choose their favorite pet as their Focus Animal and spend extra time each day playing with it and learning about it. On Friday morning, most campers will present a short lesson on their Focus Animals and teach the group what they learned. Parents are welcome to stay and enjoy watching the campers swap roles with the counselors and do the teaching. Week 2 will have some of the same field trips as Week 1 with a little more extended time at the Tortoise Farm. Week 2 Animal Camp is recommended for older first timers or campers who are returning for the second time. We strongly recommend Wilderness Camp for third time campers (unless they are not able to spend all day outside).

Has your child already been through Animal Camp at least once? Were they obsessed with the private nature preserve?
Check out Wilderness Camp! 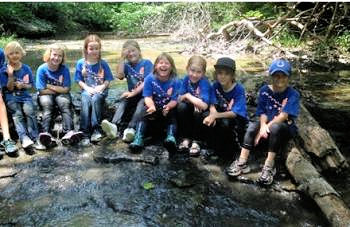 Campers hanging out in the creek at the tortoise farm. 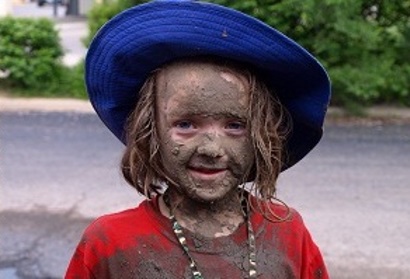 Camper proudly showing off how muddy she got during camp! 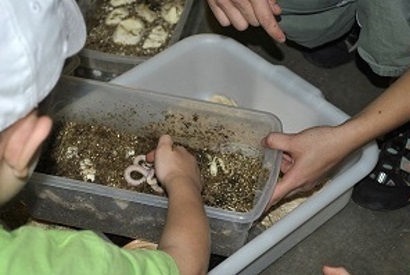 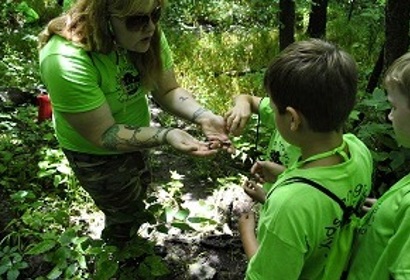 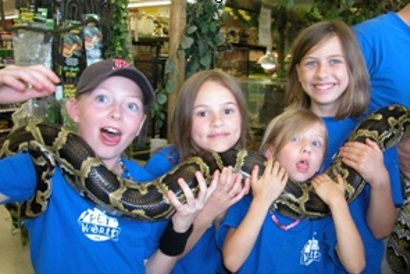 If you're signing up with friends and neighbors, make sure you sign up for the same week!

The Fine Print: Online registration forms are usually updated by March 1. Please check the year on the form before downloading or the price may be incorrect. Online registration is not an option, sorry. Parents, please download, print, then bring in the completed, signed form on April 15 or sooner.

Open Enrollment
Registration is ALWAYS handled in person, first come, first served, beginning when the store opens on APRIL 15 (tax day). AFTER the forms are processed in person, we'll begin accepting and processing mailed in and emailed registrations that have called in to discuss, are prepaid via check, or called in with credit card (that did not include the early registration fee). Remember, all parents must discuss enrollment with a trained employee to make sure their child is enrolling in the best camp for them. Parents who are signing up in person on April 15 will be processed first and there is usually a line to get in before we open. Some camps sell out by noon. If only there were more weeks in June!

Early Enrollment
It's possible to pay an additional, early registration fee and register beginning March 15. Early, prepaid registrations are processed in the order received as long as they are accompanied by the early fee. Parents can drop registration off early, call to discuss then mail the form with a check for payment, or email it and call with a credit card. Forms submitted with returned checks will be removed from registration until the bad check and fees are paid then added back to enrollment as space allows (provided spots are still available). The numbers of available spots are updated every day from March 1 until all camps are sold out (which happens every year by mid May.)

Whenever possible please print on both sides of recycled paper.