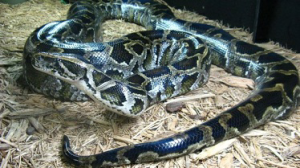 Goliath is Pet World's locally famous Burmese Python and has been a part of our staff for many, many years. He is currently about 13' long weighing about 100 lbs but he could grow to be close to 20ft when full grown and weigh up to 200lbs. (Females get even larger!) He spends his days at Pet World napping, basking under his lights, exploring his cage, going to schools and participating in our educational programs teaching children that snakes aren't always scary, slimy reptiles. He serves as a great teaching tool, demonstrating the importance of understanding your pet's needs not only when young, but also when full grown. Goliath is now enjoying his new, two story exhibit (with a heated undergound den) which arrived just in time for the one year anniversary of the fire.
Read more about Goliath here: http://sherryemerson.com/?p=176. 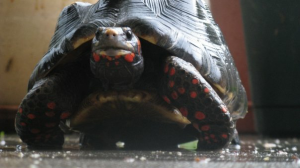 Our customer favorites are probably the giant African Spur Thigh tortoises also known as Sulcattas. These guys are so spoiled that not only do they live in an outdoor enclosure during the summer months that is bigger then our entire store (with a greenhouse, trees, and all of the sunshine, grass, wildflowers and clover they can get) but when they're brought inside for the winter they're hand fed by customers every day at 4 o'clock! One male, Dos Equis, died in 2014. The remaining male (the biggest of the bunch) has three girls in his group. We're unsure of their ages because we rescued them as adults some years ago with no real way to tell their age, but we estimate they're between 35 and 50 years old. The smallest of the girls, Baby, was born at Pet World in Y2K. She came to us in 2010.

Smaller but not to be forgotten are the Leopard and Red Footed tortoises that also spend their winters indoors at Pet World! These adorable little guys are the parents to the baby red foots you see in our store every year. They may be smaller but they have all of the personality of our bigger tortoises and absolutely love bananas. As the smaller of our tortoise staff members these guys often participate in our Educational Programs and come with us to local schools. 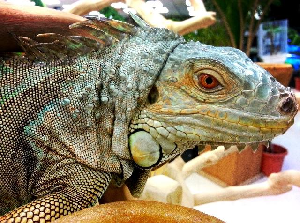 Carlita came to us in 2011 as Carlos. After further examination we realized this full of personality green iguana was actually a female and not a male! Soon, Carlos became Carlita and became a working part of our animal staff. When she was not sunning herself in her enclosure, eating, or taking a nap, this big girl was visiting schools, making appearances at birthday parties, and a regular at Story Time Live and Feature Creature.

We don't know Carlita's exact age but we enjoyed watching this big, often misunderstood, reptile grow as she became quite the star! Carlita reached national headlines when she was rescued from our store fire in 2015. She went home to rehabilitate with an employee who built her a massive palace of an enclosure and that is where she has lived ever since. We're unsure if Carlita will ever return to Pet World because she has such a great home now but, if she doesn't, she will always be remembered as the queen that she is. 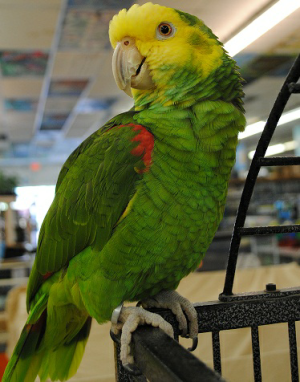 Fletcher was Pet World's store bird, a double yellow headed amazon parrot. She was hatched in April of 1995, in captivity in Kansas City, and had been a part of Pet World since before she even had feathers! One of the owners (Tim) purchased her as a "Mother's Day" gift for the other owner (Sherry) who thought Fletcher was a boy. One day, a Bird Department manager, Jacki, decided to run a DNA test. The results came back female but we never revealed this secret to Fletcher. With quite the customer following, Fletcher spent her days talking up a storm with customers, visiting schools, and participating in our educational programs to help teach children about birds. Sadly, we lost Fletcher in the devesating Pet World fire on Memorial Day, 2015.

While we have lots of birds at Pet World who learn to talk, there was a good chance that anytime you heard a wolf whistle, a "Hello!" or a quiet "Hi," that was Fletcher. Her first words were "Hola" and "Mama" and her funniest phrase was "Heeeeeeeere Kitty Kitty!" If she wanted attention, she would shout "Mama!" until someone talked to her. And yes, she did say the infamous, cliché, "Polly want a cracker?" but we swear, we did not teach her that. Fletcher is buried at PW's tortoise farm and will be sadly missed.

To see Fletcher's commemorative artwork by the staff and Erin Bratzler and for Sherry's personal tribute to Fletcher please visit her blog post at www.sherryemerson.com/?p=153 anytime.

This is the beloved Queen Latifah. She was born in 2009, a harlequin/dalmation Crested Gecko, and sadly died in the Pet World fire. We got her in April, 2014, and in one short year she had been to TONS of birthday parties, presentations, and became an immediate PW favorite. Although we didn't have her for long, she made an impact on the hearts of everyone she met. Mi Ranchito even named a drink after her, the Queenie Margarita (to raise funds for Pet World rebuilding efforts) that you can still order today in her memory.

Here is a quick, cute video of her drinking from her waterfall! 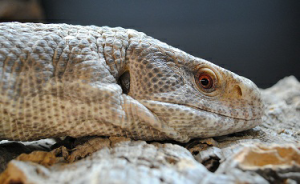 Tofu was Pet World's Savannah Monitor. Tofu came to us in the spring of 2010 when his owners could no longer take care of him. We met Tofu and, even though he was old and out of shape, we knew right away he would make a great addition to our animal staff! Tofu was about 2ft long (not including his tail). He spent his days much like a fat cat - napping, sunning himself under his heat lamp, and overeating whenever possible. Tofu is fondly remembered for visiting schools and participating in our educational programs to teach children about these large, often misunderstood, reptiles.

Tofu passed away in his sleep in March, 2013. He lived a long, happy, life and brought joy to many through education and endless photo opportunities. Pet World is happy to have had Tofu for the last few years of his life. He will be missed.

The rest of the crew!

Pet World is also home to any number of other animals used in our education programs! This currently includes our newest additions - a big, beautiful bearded dragon (Silas), and our new store bird, a Major Mitchell's (Ledbetter's) pink cockatoo named Phoenix.. Plus, some of staff members bring their own pets to show during educational programs! We also bring animals that are still for sale in the store and are constantly adding to our animal staff.

Stay tuned for information about the newest animal staff members....