Fuzzy? Yes. Cuddly? Not so much. Let's talk about something that some of you might view as less "cute and cuddly." than your typical pet. That's right, tarantulas. A contributing source for arachnaphobia, something about their creepy, hairy, skinny legs give most people the heebie-jeebies. The majority of reactions we see? People of all ages, sizes, and walks of life come into our store everyday and shudder at the thought of having one of those creatures even near them! But for a few people, tarantulas are precious and to be admired. As the youngest female Reptile Department manager in Pet World history, it's no surprise that I am one of those few. 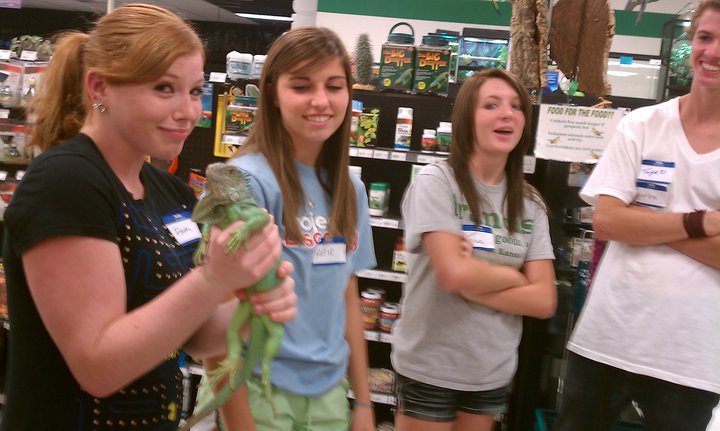 Check out Faith during her Fright Night holding a baby Carlita!

When I first started working at PW in the Fall of 2011, I couldn't even imagine getting a tarantula out by myself. Any time someone would ask to hold one, I'd run and get a manager! Eventually I figured that it was silly to be afraid of something that I worked with. So, of course, I had to get one. A rose hair tarantula to be exact. Which meant that I grew an affinity for that creepy little thing. First it was Charlotte, then I got Azula (a Versicolor Pink Toe tarantula), and now I've got little Lulu - still working on the name - (a Green Bottle Blue tarantula).

Now, I'm not the only one who likes these guys. They have quite a fan following. Tarantulas are the easiest pet anyone could ever want! They don't take up a lot of space, they don't eat that much, and they don't make noise! Although, sometimes their crickets chirp while awaiting their impending doom. But that's the worst of it. They don't shed everywhere, make messes, or beg for attention; they simply exist. Plus, how cool is it to say that you have a pet tarantula?! No one has those! It's a totally unique pet. Yes, they can bite. No, I've never been bitten. And yes, they have venom. Depending on the spider the toxicity of venom can range anywhere from a bee sting to something strong enough to make you sick. Keep in mind that everyone reacts differently.

One of the coolest things for PW employees to witness is someone actually wanting to hold a tarantula. Of course we go through guidelines to prevent any harm to the ever-so-fragile critter, but we jump at the opportunity to accommodate! Believe it or not, the most popular crowd of tarantula holders seems to be little girls! How cool is that? Addison has been holding spiders since I've worked at Pet World. Adiranna is new to the game, but can't get enough arachnid time!

So the next time you see one of these creepy, little critters, take a moment to appreciate why many of us are simply fascinated with tarantulas. Try to admire something exquisite or nice about them! Even if it's only that they eat their unwanted guests.

That's all for now!! 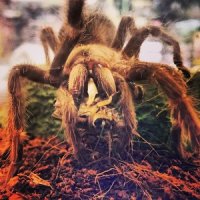 Bird Eater tarantula with a cricket 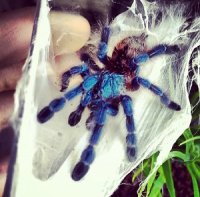 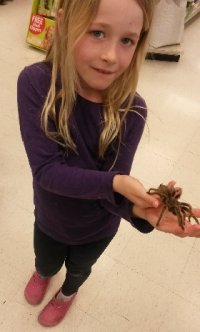 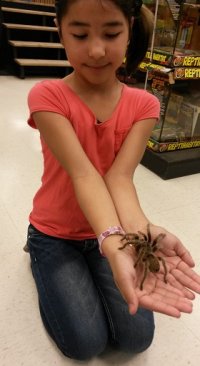