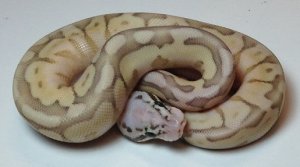 You may be asking, “Why does Pet World have so many ball pythons? Why do they come in so many colors?” The answer, “They are awesome!”. Tim began breeding ball pythons 13 years ago and they have been a staple in the Reptile Zone at Pet world ever since.

Ball Pythons (Python regius) are a friendly and calm snake originating in the savannas of Western Africa. Males grow up to be around 3-5ft in size while females can be up to 6ft in length. When scared they curl up in a ball (hence their name) or hide in a burrow. One of the oldest known ball pythons was 48 however they tend to live around 30-35 years.

How does Pet World go about breeding 500 of these guys each year? The first step is waiting until the adults are mature, for males it takes roughly 2 years and 3 years for females. When the ball pythons are mature we put a male and female in a cage and allow them to copulate. When copulating the two twist their tails together, hold each other with their spurs, and the male hemipenes enter the female. We start introducing the males to the females around Dec 1 and breeding continues well into May. Each female is different and the time it takes for eggs to develop can take around one month to several. 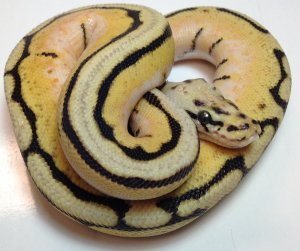 We start seeing eggs in April and the laying season winds up in September. A female will lay, on average, six eggs each season. She is very protective of them and does not like to be bothered. If given the opportunity, a female ball python will stay curled around her eggs until they hatch! At Pet World, however, we remove the females in order to rest and recuperate. Once the eggs are laid, they are placed in a small container containing moist vermiculite and kept in an incubator at 89 degrees where they develop for around 54 days.

The hardest part for baby ball pythons is hatching! Hatching usually takes a few days, even up to a week! They start by poking a hole in the egg with a special bump on their nose for this purpose called an egg tooth. They slowly work on making that hole a little bigger until they can easily fit through it. It is very difficult and they take many breaks. Furthermore they need to wait until they absorb the yolk sack, which means sometimes they have to wait to leave the egg until this happens. Once they are out of the shell we take the babies and allow them to rest in a humid environment and get used to their new world. Once the babies have shed and eaten a few times they are finally ready to meet you!

The different colors of ball pythons are all based on genetics. Just like genetics determine what eye color we have, it will determine what a ball python looks like. The genetics control the patterns and colors of a ball python. For example, the spider genes causes skinny black lines to show up, while the vpi axanthic gene causes the snake to have only shades of grey. When parents with different genes mate, the babies can take traits of both genes and create a new pattern. The name of the snake will reflect the genes that are present such as a spider vpi axanthic. Sometimes, there are multiple genes involved the morph gets a nickname such as the pewter ball python which has the cinnamon and pastel gene.

So next time you are in Pet World come check out the new babies and their cool patterns! Plus check out our list of High End Ball Pythons here!