Hey Pet World fans! We've been waiting months for confirmation on this, but we're finally excited to announce that we have just been approved to start carrying and selling (give me a little drum roll here). 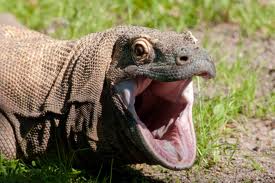 We love reptiles and we know you guys do too. So we're always looking to diversify our selection and we've settled on these big guys for the next new thing!

We'll be getting in a shipment in the next few weeks of our first 5 baby komodos. You may be asking yourself "what do I need to take care of one of these?" well we'll have starter setups for sale by the time we get in our little baby dragons, but eventually you'll need to build something at home (we are talking about a 10ft lizard full grown here, people!). Aside from that you'll be looking at substrate, lighting, and heat just like with most lizards. A Pet World employee can help you get that all sorted out.