The Pet World staff would like to thank the community for the help during this very difficult time. The outpouring of love and support has been overwhelming. The picture to the right shows staff members after firefighters rescued Goliath, the store's locally famous burmese python.

We are no longer accepting donations for fire relief efforts but a huge THANK YOU to everyone who helped get us back on our feet. We will never forget the patience and kindness of Central Bank of the Midwest (formally Douglas County Bank) in Lawrence, Kansas, while helping us set up and manage the Pet World Relief Fund.

This is the orginal statement released the day after the tragic fire. Please scroll through all the posts for other UPDATES. 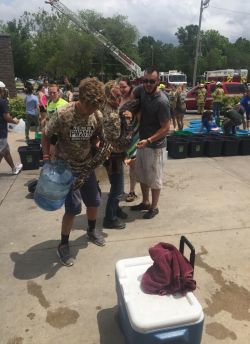 Yesterday Pet World was closed for Memorial Day. At 8am, a team of staff members worked to care for the animals. Even when we are closed for a holiday, we always take care of the animals. Holidays are actually a beautiful time when the animals get a break from all the human activity and our employees get to spend uninterrupted time with the animals. Shortly after 9am the team locked up the store and headed to the tortoise farm (Pet World’s private, 80 acre nature preserve) for an annual staff event that started at 10am.

As far as we know, sometime after noon, an accidental fire broke out in the backroom of the store, in the electrical panels where electrical service enters the building. We have been informed that the fire was very intense and grew quickly, spreading up the wall and across the ceiling, between the ceiling tiles and the roof. It apparently reached the flashover stage in probably less than five minutes, when the seemingly safe, plastic and synthetic materials in the backroom area all became combustibles and simultaneously ignited, fuelng the fire beyond the point of reasonable rescue expectations. The front of the store – the parts all of you see – did not burn. The most tragic losses were all of Tim’s breeder snakes in the back who perished immediately as they were nearest to the heart of the fire. The one thing above all else that Tim cannot take is animal suffering. Most of the females were gravid (pregnant with eggs) which made this even harder to take. With the help and support of compassionate firefighters, the snakes were removed from the premises (in order to assist with their investigation of that backroom area) and were buried at the tortoise farm. This loss was a devastating blow. Tim will not be available for comment so please do not ask. He just needs space right now.

None of the pets in the rest of the store burned. The fire never reached the boarding room, the Education Room, nor the sales floor – only the backroom and the ceiling - but the heat was so intense it cracked the exterior concrete wall of the building and melted part of the fishroom 15 feet away from the flames. Many of the fish, reptiles, and arachnids survived but all of the mammals and birds died except for the feeder rodents and some litters of gerbils and hamsters in a separate structure. Firefighters allowed Tim to personally check every single cage in the store to recover all surviving animals and he did not stop until every living thing, down to the last goldfish, was recovered. I personally inspected every small mammal and bird enclosure. The pets all looked as if they had been sleeping in the rain. The pet loss was horrible but they were not burned. I don’t know why but for some reason we find this comforting to know. We’ve been assured that all the warm blooded animals died quickly from fumes and smoke. With the birds, who die from non-stick Teflon fumes, it was probably within minutes. In fact, we were told that it is very likely that had we been open when this happened, human lives would have been lost because there were no fire sprinklers in the building to keep the fire from growing while help was on the way.

Many of you know Bob, who always hangs out at PW in the mornings, introduces himself as Tim’s father-in-law, the token old guy, who is married to my mom. The gals at Westlake hardware had Bob’s number on file and called him immediately, while the gals at Lasting Impressions called us. The landline was immediately destroyed by the fire, unable to send a distress call, power was immediately lost, and we did not have monitored smoke detection with wireless or cellular capability. Firefighters were on the scene within minutes of the smoke reports, prying open the back door, and Bob, who lives nearby, unlocked the front door for them. The response time was impressive but it was already too late to save many lives because, without sprinklers or someone there to use a fire extingisher, flashover occured quickly after the fire began.

Employees were in various stages of the staff 5K trail run when phones started ringing. Some were in the middle of the run, deep in the woods, and some had just finished, already en route back to Lawrence. Tim was actually about 50 yards from the finish line when we heard the news. His brother, Cale, told him and Tim literally kept running, right through the finish line, straight to Cale’s truck. Employees began arriving on the scene within about 15 minutes. Friends and family waited until everyone was safely back from the run and took care of everything there. A few non-employees ended up stuck briefly in the mud but even they came to Pet World afterward to help. All the surviving animals have either been temporarily rehomed or are in the process of being rehomed.

Emergency personnel, veterinarians, current and former employees, family, friends, and customers swarmed the pet store property helping in any way they could. The scene was poignantly tragic and beautiful at the same time. We are all incredibly grateful for the love and support of this community. When my eyes opened this morning, my first thought was of being surrounded by our staff who were surrounded by family who were surrounded by the community. My heart is truly overflowing.

The non-local press is asking us for numbers. We will not be announcing an official death toll any time soon. We don’t yet know exactly and at this point cannot see the significance of releasing this information. All of our actual customers know how many animals were in Pet World at any given time and are not interested in shock value or ratings. Regarding the lives lost, all animals who perished died quickly from fumes and smoke, except for Tim’s breeder snakes who died in the actual fire in the backroom. None of the other animals were exposed to the fire.

There were no dogs in the building. One adoptable kitten, Mindy, perished from the fumes and smoke. Fletcher, the store bird, did not survive and Queen Latifah, the store Crested Gecko, also did not survive. Haiku, our Taiwan Beauty, and our new chicken snake (Tiger Rat Snake) also perished. Many reptiles survived, including Carlita, Mushu, and Goliath. The large rescue tortoises were already at the tortoise farm for the summer.

The large catfish did not survive but a surprising number of fish did and have been transported to other pet stores. Friends who also own pet stores came to our rescue. Miles of Exotics in north K.C. and Olathe Pets are temporarily housing some of our surviving reptiles and fish, Safari Pets in Topeka is housing our feeder rodents, and PW employees are caring for the rest in their homes while the Mata Mata turtle recovers at Gentle Care animal clinic.

We would like to thank the Lawrence Humane Society staff and everyone else who joined forces to help. So many people want to help! At this time, we would like to ask that NO public funding be opened on our behalf. We have not authorized any GoFundMe accounts and respectfully request that no one contribute financially to any relief efforts on our behalf as none of them are officially linked to Pet World. We are currently evaluating the situation and if a relief fund is created it will be announced on this site. Until then, please do not be fooled into donating to an unauthorized fund. UPDATE: Please see above for official Relief Fund information.

I also must recognize the unbelievable compassion and effort of the firefighters. I have never witnessed such a high level of kind, respectful professionalism. I can’t fathom how they do it but I am truly in awe.

Everyone wants to know if this has been too much for Tim and if we will reopen. I will admit, this business is very hard. Setting the standards, constantly seeking the best possible ways to promote responsible pet ownership, employees working twice as hard as most for half of what they should get paid – it’s not easy. Our staff is the most dedicated you will ever meet. I wondered, last night, if this would break Tim. 27 years is a long time to keep up this pace. But when we were finally alone and it all sank in, Tim and I were able to discuss our options. I thought the hardest part of all this would be the loss of his life’s work – 20 years of breeder snakes. I was wrong. All he cared about were the kids and what they would do without Pet World in their lives.

Tim can never forget how he felt as a child when he and his young friends were refused entry to their local pet store and not allowed to hold the animals. He knows that the total separation of humans and animals will ultimately lead to the disconnection of humans and nature. We truly believe in our mission. I told him about the children who hugged me yesterday and assured me they would help us rebuild. So finally, this morning, I asked Tim what he wanted to do. He told me, without a doubt, we will rebuild and bring Pet World back to the Lawrence community as soon as possible.

We have been blessed with the ability to connect children to nature. That’s what matters most to us. We feel, as responsible stewards, that this is our calling and we will continue to answer it. We have two choices in life: surrender or fight. For us, surrender is not an option. We thank you for your patience, kindness, and support, and look forward to seeing you again soon.

Sincerely,
Sherry Emerson
on behalf of the Pet World staff